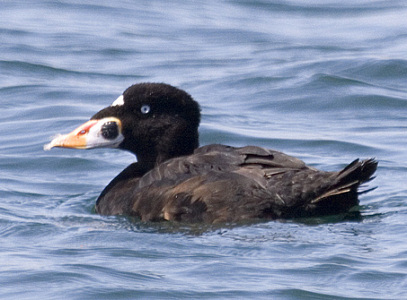 Appearance:
Male - The male Surf Scoter has a glossy-black plumage except for white patches on the forehead and nape, a distinctive large red-yellow-white beak which is swollen at the base and has a round black patch on either side, white eyes and the legs and feet are reddish-orange.
Female - The female has a mostly brown body with a dark crown, and neck, with white patches on the face, blackish wings, a grey beak which is less swollen than the male, pale eyes, and brownish-yellow legs and feet.

Habitat/Range: - Coastal waters, rivers, wooded tundra, and large inland lakes in Canada and Alaska. Winters further south on the coasts of the USA, with a small number in the Great Lakes. 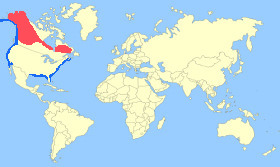 Breeding Season: - From end of May onwards.

Notes: - The Surf Scoter is a large sea duck. Although, not an endangered duck, the population has declined over the last 40 years, and many were lost during the San Francisco oil-spill in November 2007.