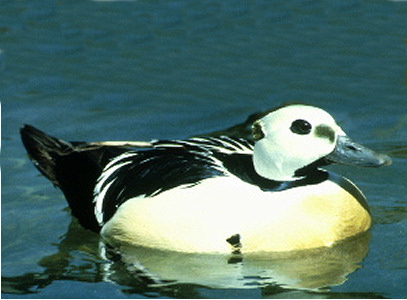 Appearance:
Male - The male Steller's Eider has a white head and neck, black eye-ring, short greyish-green crest and greenish patch in front of the eye, greyish beak, a black collar, throat, and upperparts, a blue speculum, the underparts are cinnamon which is paler on the breast and upper flanks, elongated scapulars are black with white edges, the wings have white coverts, black primaries, and blue-purple secondaries with white tips, and the legs and feet are grey.
Female - The female has a uniform dark red-brown plumage, a buff coloured eye-ring, blue speculum with white borders, grey beak, and grey legs and feet.
Eclipse - The male in eclipse plumage is similar to the female but retains white upper wing coverts, and may have white mottling on head and breast.

Habitat/Range: - Arctic tundra, and Arctic coasts of Russia, and Alaska. Winters in the Bering Sea, northern Scandinavia, and the Baltic Sea. 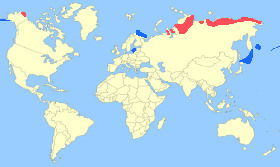 Notes: - The Steller's Eider is a medium-large sea duck and is the smallest and least abundant of the Eider species. This duck is classed as 'vulnerable' but like the Spectacled Eider very little is known about this duck and why it has declined in numbers.