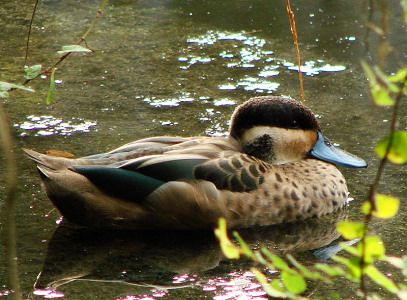 Appearance: - The Hottentot Teal has a black cap which extends to just below the dark-brown eyes, black nape, a whitish-buff coloured lower face and throat. a dark patch on the upper neck or ear, pale blue beak with black line running down middle, the neck, breast and front flanks are grey-brown with dark brown spots, buff rear-flanks and abdomen, dark-brown back, rump and tail, dark-brown wings with slight green-blue gloss and a green iridescent speculum, and bluish-grey legs and feet. Both sexes are similar. 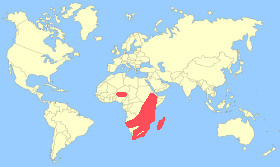 Breeding Season: - January to April in South Africa or June to October in eastern Africa (Kenya).

Notes: - The Hottentot Teal is a very small dabbling duck and the smallest duck in Africa. It has a similar plumage to the Puna Teal and the Silver Teal.