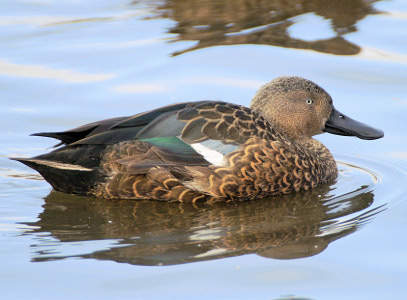 Appearance:
Male - The male Cape Shoveler has a speckled blackish crown and hindneck, a pale grey-buff face and throat, yellow eyes, a large black spatulate beak, a reddish-brown body with light-buff feather edges giving a mottled appearance, a green-black rump and uppertail, tertials and scapulars are a glossy blue-black, the primary wing feathers are brown, the forewing is pale blue, the speculum is metallic green-blue with a white border, and the legs and feet are yellow-orange.
Female - The female is similar but has a dull brownish and more mottled appearance, a darker head, brown eyes, a dark brownish-grey spatulate beak, the wings are greyish, and the legs and feet are a greyish-yellow. 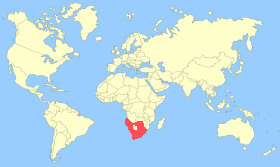 Breeding Season: - Mainly August to December but variable depending on water levels and food.