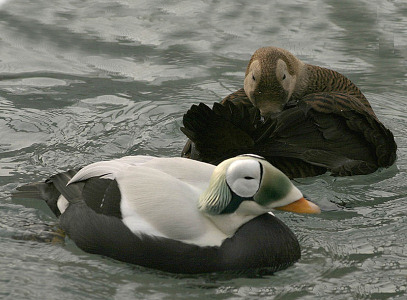 Appearance:
Male - The male Spectacled Eider has an olive-green nape, top of crown, forehead, and front of face, a large white circular eye patch bordered with black, an orange beak, the chin, throat, and upperparts are white, blackish-grey underparts, rump, and tail, and legs and feet are a drab yellow-grey.
Female - The female has a rich brown barred plumage, a paler head and neck with large pale-buff eye patches, a dark bluish-grey beak and yellowish-brown legs and feet.
Eclipse - The male in eclipse plumage is similar to the female but retains the white wing coverts, has a darker plumage and darker markings around the eye and nape. It also retains an orange beak.

Habitat/Range: - Arctic coastal tundra, and coastal waters in the Yukon-Delta, Alaska, and north-eastern coast of Siberia. It is thought that they winter in the Bering Sea. 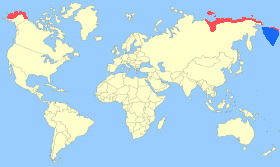 Breeding Season: - Late May or June.

Notes: - The Spectacled Eider is a large sea duck named because its large eye patches resemble spectacles. Numbers have dramatically declined since the 1960s in Alaska but little is known about this duck and where exactly they migrate to in the winter.