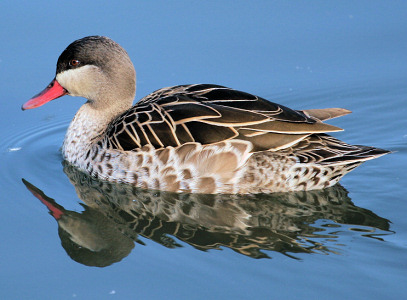 Appearance: - The Red-billed Teal has a dark-brown cap which extends to below the eye, dark-brown nape, a white throat and cheeks, dark-brown eyes, a pinkish-red beak with black running down the middle, dark-brown scalloped upperparts, much paler scalloped underparts and flanks, dark-brown wings and secondary flight feathers are buff with a black stripe across them, and dark-grey legs and feet. Both sexes are similar.

Habitat/Range: - Freshwater wetlands, shallow lakes, marshlands, and streams in southern and eastern Africa. They are not migratory but will fly great distances to find suitable waters. 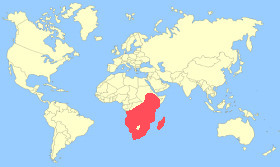 Breeding Season: - January to August in eastern Africa and June to October in southern Africa. After the start of the rainy season.

Notes: - The Red-billed Teal (sometimes called the Red-billed Pintail) is an African dabbling duck. This is a quiet duck that likes to feed by grazing on land during the evening or night. It looks similar to the White-cheeked Pintail (Bahama Pintail).