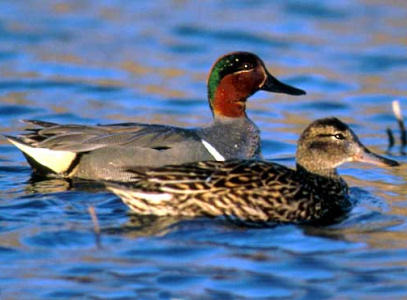 Appearance:
Male - The male Green-winged Teal has a chestnut head and neck, a wide metallic dark green stripe running from the front of the eye to the neck which is slightly bordered with white, the white border extends to the base of the beak, a grey back and flanks, a creamy black spotted breast and whitish underparts, a metallic green speculum bordered by white, dark-grey beak, and legs and feet are grey. The Green-winged Teal is very similar to the Common (Eurasian) Teal but differs by having a vertical white stripe on the side of the breast, and a much less defined white border around the green stripe on the face.
Female - The female has a sandy brown plumage streaked with dark brown.
Eclipse - The male in eclipse plumage is similar to the female but is more uniform in colour and with a dark head and vestigial facial markings. 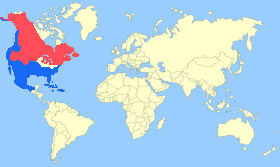 Notes: - The Green-winged Teal is a common and widespread North American dabbling duck. It was thought to be the same species as the Common (Eurasian) Teal but this is still being reviewed by the American Ornithologists Union. This is the smallest dabbling duck native to America.