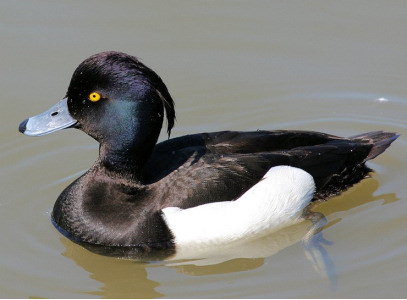 Appearance:
Male - The male Tufted Duck has a distinctive tuft on its head giving the duck its name. The head, neck, and upper breast are black with a purple sheen. The upperparts, vent, and tail are black, the flanks, and abdomen are white.The wings are black with a white bar. The beak is grey-blue with a black tip and the eyes are bright yellow.
Female - Females are dark brown with a paler brown on the underside, and a shorter tuft.
Eclipse - The male in eclipse plumage is similar to the female with brownish black upperparts and breast, whitish at the base of chin and throat, the breast feathers are edged with white and the sides and flanks are pale brown with whitish vermiculation.

Habitat/Range: - Lakes, ponds, rivers, estuaries, and seashore. Widespread in the UK, Iceland, most of Europe, across into Asia including Russia and Siberia, and east to northern Japan. They winter in the milder south and west of Europe, the Mediterranean Sea, Africa, southern Asia including India, Thailand, Philippines, and southern Japan. 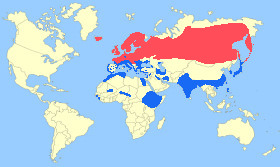 Breeding Season: - May and June.

Notes: - The Tufted duck is the most widespread diving duck in the UK, and Europe. This duck gets its name from the obvious tuft on its head.