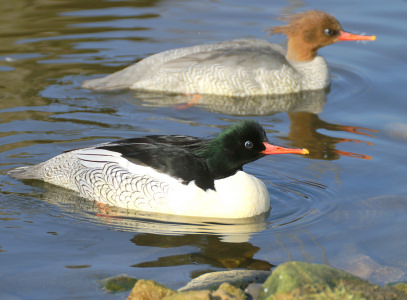 Appearance:
Male - The male Scaly-sided Merganser has a black head and neck with a glossy green sheen, a distinctive long wispy crest, a thin red beak, eyes are dark brown, the foreneck, breast and underparts are white, the flanks, vent and rump have whitish feathers with dark grey edgings, the mantle, hindneck are blackish, the wings are dark grey with white secondaries and greater coverts, and legs and feet are red.
Female - The female has a brown head and upper neck with a wispy crest, a thin reddish beak, dark eyes, greyish back, and whitish undersides, the lower neck, flanks, and upper tail have whitish feathers with dark grey edgings, and the legs and feet are reddish.
Eclipse - The male in eclipse plumage is similar to the female but retains the white in its upperwing and scaling on sides of body. 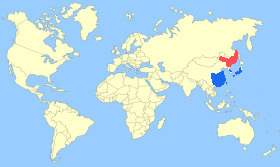 Breeding Season: - April to May.

Notes: - The Scaly-sided Merganser or Chinese Merganser is an east-Asian sea duck which dives for small fish and uses its sawbill to grip the fish. This duck is considered to be 'endangered' due to habitat loss with the destruction of forests.