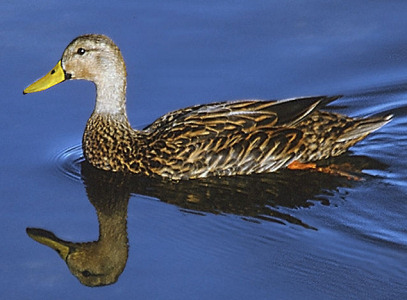 Appearance: - The male Mottled Duck has a light-buff head and neck, a dark crown and eye-stripe, dark-brown eyes, yellow beak, a dark-brown body with black spots on the breast and black markings on the body, dark-brown tail, dark-brown wings with shiny green-blue speculum, and the legs and feet are orange. The female is similar but has an orange beak which is sometimes lined with black splotches at the edge or base.

Food: - Mainly plants, but also some molluscs and aquatic insects. Will graze on land or dabble in shallow water.

Habitat/Range: - Coastal marshes, wetlands, and wet grasslands. There are two populations with one population residing on the Gulf of Mexico which may venture further south outside of the breeding season and the other population is resident in Florida. 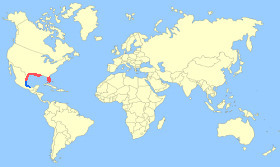 Breeding Season: - Mainly May to June.

Notes: - The Mottled Duck or Mottled Mallard is a medium sized dabbling duck which resembles a female Mallard or American Black Duck which it is related to. There are two distinct populations of Mottled Duck - Anas Fulvigula which is found on the Gulf of Mexico, and Anas Fulvigula Fulvigula found in Florida and called the Florida Duck or Florida Mallard. As with all Mallard ducks they are able to produce fertile hybrids with their close releatives such as the Mallard and American Black Duck but there is currently no cause for concern and they are listed as a separate species. The Mottled Duck is common and is listed as 'Least Concern' by the IUCN.