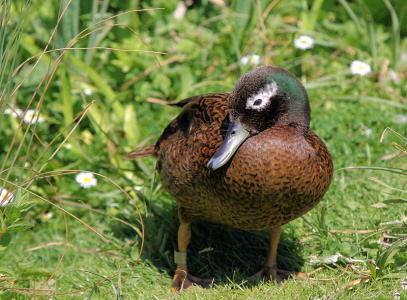 Appearance: - The Laysan Duck has a reddish-brown plumage with dark markings, and white eye-patch. The white feathers around the eye and on the head varies and some males have a faint green iridescence on the head and neck. The male's beak is dark-green with black blotching while the female's beak is brownish-orange with black blotching. The wing has a purple-green speculum, and the legs and feet are orange. Both sexes are similar.

Habitat/Range: - Shallow lakes and shore on the Hawaiian island of Laysan.

Notes: - The Laysan Duck is a dabbling duck which is also called the Laysan Teal. This duck used to be found throughout the Hawaiian Islands but is now only resident on the Layson island of Hawaii. The decline of this duck occured when the Hawaiian Islands were first colonised by the Polynesians along with non-native mammals such as rats which killed off many of these birds. As a result these ducks are listed as 'critically endangered'. In 2004, 42 birds were moved to the nearby island of Midway Atoll with great success.