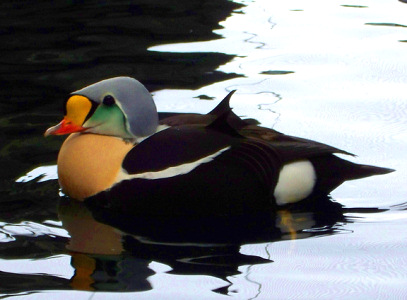 Appearance:
Male - The male King Eider has a bluish-grey crown and nape, pale green cheeks, chin and neck are white, breast is white with a salmon-pinkish wash, red beak with a large orange knob which is bordered with black, black body and tail with large white patch either side of the rump, and legs and feet are yellow.
Female - The female has a deep reddish-brown plumage marked with dark chevrons on back and flanks, a grey beak but without the large orange knob of the male, and legs and feet are grey or yellowish. The female resembles the Common Eider.
Eclipse - The male in eclipse plumage has a dark brown plumage with variable white markings on breast and mantle. The wings retain their visible white coverts. 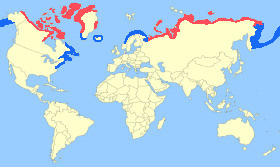 Notes: - Like the Long-tailed Duck, this species breeds in the extreme north. The King Eider is a large sea duck which is hunted in large numbers in the Arctic during the Spring.