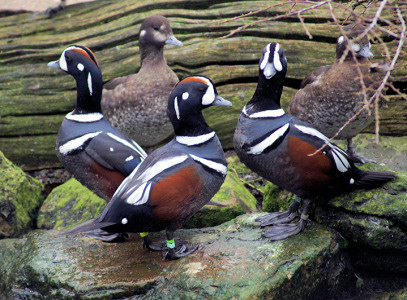 Appearance:
Male - The male Harlequin Duck has a dark bluish-grey head and neck with a large white crescent patch between the eye and the blue-grey beak which extends over the crown and down the nape turning chestnut colour, along with a black band from the beak running over the crown and down the nape, white spot on the ear-coverts and white patch on sides of neck, the chin, throat and front neck are black, upperback and breast are grey, the flanks have large chestnut patches, a brownish-grey abdomen, white patches on body are bordered with black, and grey legs and feet.
Female - The female is sooty-brown with whitish patches on head.
Eclipse - The male in eclipse is similar to the female but retains white markings on the head, breast, and wings. 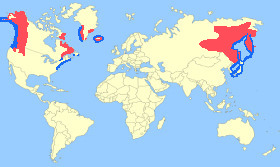 Breeding Season: - Late May in Iceland, and late June in Arctic regions.

Notes: - The Harlequin Duck is a small sea duck. It gets its name because of a colourfully dressed character in Commedia dell'arte.