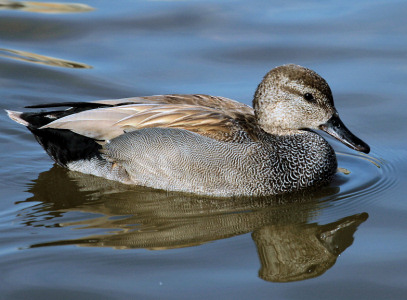 Appearance:
Male - The male Gadwall has a buff brown head with a darker crown, grey-black scalloped breast, narrow black beak, dark-brown eyes, patterned-grey mantle and flanks, brown back, black rear-end, belly and vent are whitish, wings are mostly grey with a white speculum, and legs and feet are orange-yellow.
Female - The female is mostly light-brown with darker scalloping on the body, whitish belly, whitish throat and chin, and has a distinctive white speculum, and dark orange-edged beak.
Eclipse - The male in eclipse plumage looks similar to the female but the back is greyer with less markings, and the wing pattern remains. There is also less orange on the beak. 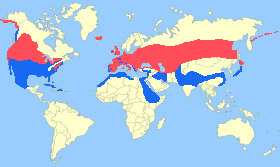 Breeding Season: - From May to June.

Notes: - The Gadwall is a dabbling duck with an extremely large range from North America, Europe to Asia.