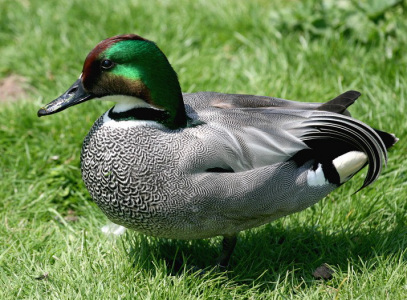 Appearance:
Male - In the breeding season the male Falcated Duck has a dark iridescent green head, neck, crest and collar, bronzed crown, white throat, pale grey breast with black markings, grey body with distinctive elongated tertiaries which are falcated or sickle shaped, and a long dark grey beak.
Female - The female is dark grey-brown with dark streaking.
Eclipse - The male in eclipse plumage is similar to the female but has a darker head and back. 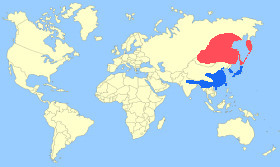 Breeding Season: - From May to early July.

Notes: - The Falcated Duck (or Falcated Teal) is a dabbling duck. It has very distinctive long sickle-shaped (falcated) tertials hanging off its back which give this duck its name. They are hunted for food, and their attractive feathers in China.