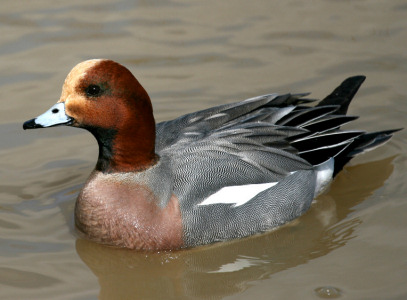 Appearance:
Male - The male Eurasian Wigeon has a chestnut coloured head with creamy-yellow forehead and crown, silver-grey beak with black tip, a pink breast, mainly grey body with white flash along the flanks, white underparts, black rear-end, dark-green speculum, white patch on upper wings, and legs and feet are grey.
Female - The female is mostly grey-brown and has whitish underparts.
Eclipse - The male in eclipse plumage is fairly similiar to the female but has a rich chestnut brown head, breast and flanks, and retains the wing pattern. 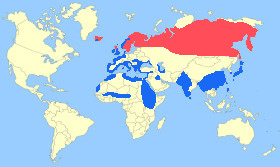 Breeding Season: - May to June.

Notes: - The Eurasian Wigeon is a dabbling duck which is widespread with a large population. This duck has unusual feeding habits, it will graze on land like a goose and because it is not good at diving it will steal food from diving ducks as they surface.