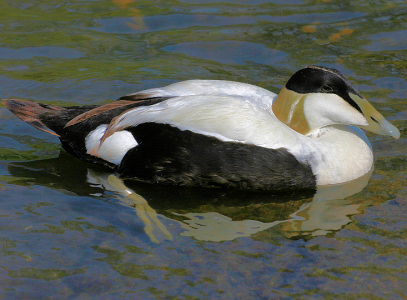 Appearance:
Male - The male Eider has a large grey-green wedge-shaped beak, black and white plumage, and a pale green nape. The legs and feet are olive-green.
Female - The female has a brown barred plumage but still has the large characteristic beak which is olive-grey.
Eclipse - The male in eclipse plumage has a a dark brown plumage with white markings on the back and wings.

Food: - Mainly mussels which are swallowed whole, as well as other animal matter such as molluscs, and crustaceans. 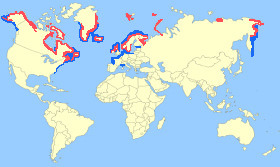 Notes: - The Common Eider is a large sea duck which is found in the Northern Hemisphere. The female Eider plucks the feathers from her breast to line her nest. It used to be commonplace for Eider feathers (Eiderdown) to be harvested for filling pillows and quilts.