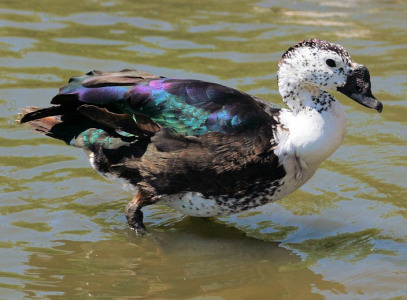 Appearance: - The Comb Duck has a white head & upper neck with dark freckled spots, darker crown, dark brown eyes, dark beak, the male has a large black knob on the beak, the lower neck and underparts are pure white, the upperparts, tail, and wings are glossy black with a bluish-green iridescence, and legs and feet are dark grey. Both sexes are similar except the male is larger with a large black knob on the beak and the female has a less glossy plumage. 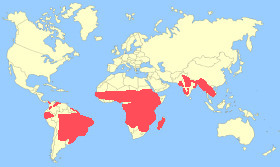 Breeding Season: - Variable but usually during or after the rainy season in Africa.

Notes: - The Comb Duck is named because of the male's distinctive knob on top of its beak. There are two sub-species of this duck: the Old World Knob-billed Duck (Sarkidiornis Melanotos Melanotos) and the Comb Duck (Sarkidiornis Melanotos Sylvicola) from South America which is smaller with darker flanks. This duck nests in tree cavities or in tall grass near to water. Despite the wide range of this duck it is declining in numbers due to habitat loss, and hunting.