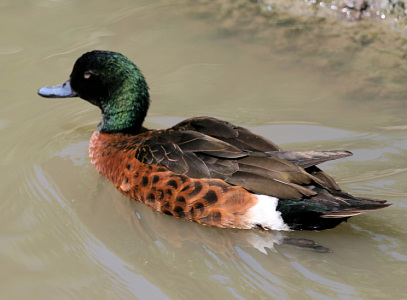 Appearance:
Male - The male Chestnut Teal has an iridescent green head and upper neck, red eyes, and blue-grey beak with black markings, a deep chestnut brown breast, lower neck, and flanks which have dark brown spots, brown back and wings, black tail and rump, the ventral area has white sides behind the flanks, and the legs and feet are greenish-grey.
Female - The female has a brown head, red eyes, and mottled brown body.
Eclipse - The male in eclipse plumage is similar to the female but has more colouring with a deeper brown plumage. May still have greenish-grey head and neck.

Habitat/Range: - Wetlands, swamps, marshes, and coastal estuaries in south-east and south-west Australia, and also in Tasmania. 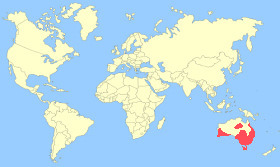 Notes: - The Chestnut Teal is a small southern Australian dabbling duck. The female is very similar in appearance to the Grey Teal.