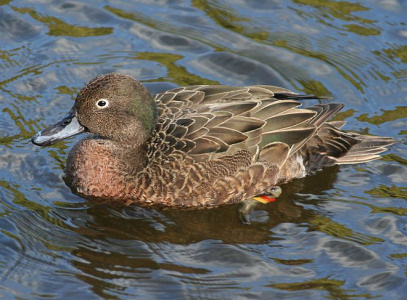 Appearance:
Male: - The male Brown Teal has an overall brown plumage with a dark brown head and neck with green gloss on sides of head, dark-brown eyes with white eye ring, a blue-grey beak with black running down the middle, sometimes a white ring round the base of the neck, a chestnut-brown breast, buff underparts, dark brown and buff flanks, the upperparts, rump, and tail are dark brown, dark-brown wings with green and black speculum, and grey legs and feet.
Female: The female is similar but duller with no green gloss on the sides of the head and no ring round the base of the neck.
Eclipse: The male in eclipse plumage is very similar to the female but has white patches on the ventral region. 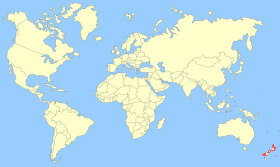 Notes: - The Brown Teal or New Zealand Teal also called the Pateke by the Maori is a small dabbling duck which is endemic to new Zealand. This duck was widespread throughout New Zealand but is now endangered due to the introduction of predators such as ferrets, cats and rats. They are mainly nocturnal and feed at night.