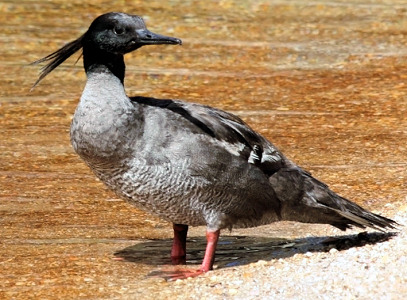 Appearance: - The male Brazilian Merganser has a shiny green-black head and neck with a long crest, brown eyes, a long thin black beak, the lower neck, breast and flanks are light grey, the underparts are finely barred with brown and white, upperparts are dark grey, blackish wings with white patch which is distinctive in flight, and legs and feet are reddish. The female is similar but is smaller and has a shorter beak and crest. 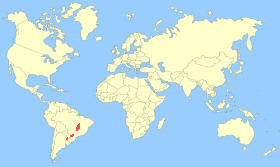 Notes: - The Brazilian Merganser is a South American sea duck which dives for small fish and uses its sawbill to grip the fish. They nest in tree hollows beside a fast-flowing river. The Brazilian Merganser is classed as 'Endangered' with a very small population of around 250 birds. This duck has mainly declined due to loss of habitat because of deforestation, silting of rivers by farming and mining, hydropower plants and dam-building.