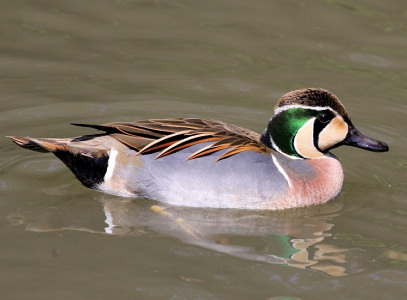 Appearance:
Male - The male Baikal Teal has a distinctive head with a dark crown bordered by a white stripe, creamy buff face, with a green iridescent patch on the sides of the head, black chin, and a thin black stripe from the chin to the eye. The breast is light brown or pinkish with dark spots, bluish-grey flanks, whitish undersides, black elongated scapulars, dark grey beak and yellow-grey legs.
Female - The female is mainly brown with a dark brown crown, a distinctive white spot at the base of the beak, dark stripes from the eye to the nape, and a white throat.
Eclipse - The male in eclipse plumage is similar to the female and also has a white spot at the base of the beak but has a thin dark stripe from the chin to the eye, and a pinkish-white breast with dark spots. 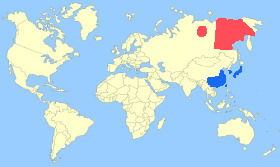 Notes: - The Baikal Teal is also called the Bimaculate Duck or Squawk Duck and is a dabbling duck which is slightly larger than the Common Teal. The name 'Baikal' comes from the world's deepest lake in Siberia.